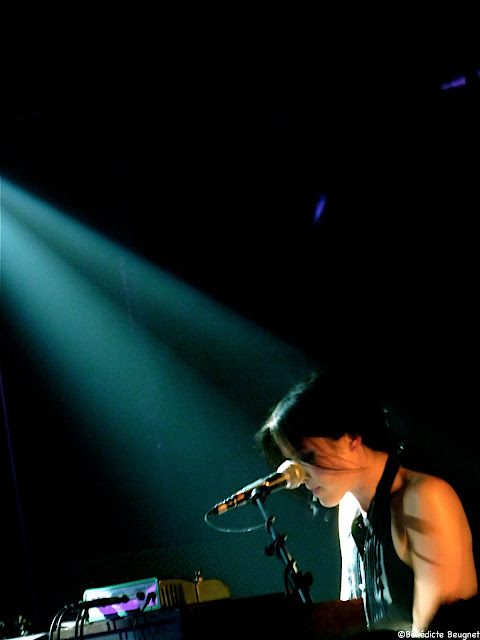 Back in the past. This trip will bring me 7 years ago, when The Corrs and Texas were part of my everyday life. Since the band split up, Andrea Corr tried to play but she’s back with singing. This is not her first atteempt since then, but Ten Feet High didn’t hit the score she wanted I think …
She’s back with a new album Lifelines (sorti le 30/05/11) made from covers (Velvet Underground, John Lennon, Blue Nile … ).
She’s just started a UK tour. First gig was in Birmingham, she was obviously in Glasgow on May 30th, and will end in London.
The worse thing for me was to try to get rid of the thought the all band would be there … yes, she will be on her own. I went to the concert without listening to any songs from the album. I only listened to Tinseltown in the Rain and No.9 Dream as they were advertised but appart from that I haven’t bought anything …

When she first bantered with the audience she explains that when The Corrs started touring, one of their first gig was in Glasgow. That’s why she wanted to dedicate the next song to all glaswegians who followed her during all these years :

Andrea hasn’t changed at all. Always smiling, always making mistakes and laughing at herself (she mixed the name of the guy from the support act). Songs are good live, I don’t know if the album version will be the same (don’t think so), but it’s a good choice for the covers.

Between covers she even made some covers from The Corrs *humour* 🙂

I didn’t record it, but at the end we had Breathless as well …
Andrea will end the concert with Tinseltown in the Rain, and I will learn at the same time that the original band, Blue Nile, is a glaswegian band, so this song had a warm welcome from the audience of course. But it was a good choice to end the gig and the crack was good too.

I was really happy to go to this concert. To bring me back to my “fan attitude” from my early youth ahaha.
Of course, a fan will stay a fan, who waits at the end of the gig … but this time I didn’t have time, short timing. I waited, a bit, but she never came … pity … for her … for me. But that hasn’t changed anything about my thoughts on this evening.
I could go another time me think.

Some pics from the gig made by moi : Andrea Corr, Oran Mor